Nigel Smith, one of the Directors of A E Thomson Ltd recently organised his 3rd Sportsman Dinner

just over £10,500 raised in aid of Witchford Colts (where he is the Chairman)/local grassroots football and the unbelievable charity of East Anglian Air Ambulance. Nigel was overwhelmed by the support and amount raised. There was around 250 guests at the event which was a sell out and in fact there was even a waiting list for tickets !! The vast majority of the guests have attended each year and support is invaluable.

The speakers this year was Matt Le Tissier and Micky Quinn who provided great stories from their past experience within the sport both while playing and into their media life on both Sky Sports and Radio. As always the guys were very humble and welcoming to anyone that wished for a chat or photo and wanted to talk through specific memories of them as players. 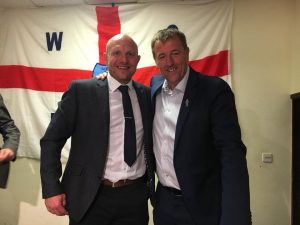 The evening entailed the traditional heads and tails game in which one lucky guest won. A 3 course meal which the caterers provided great food and service throughout. In between the speakers it was the ever auction with some fantastic items up which included a Ipswich Town shirt, Signed AJ Joshua Glove, Steven Gerrard Shirt, 1966 World Cup Winners Shirt, Various Golf 4 ball, a 9 hole golf Lesson with PGA Pro Paul Geen, Driving experiences and more. The support for this was unreal and I have to thank all the businesses, individuals, companies that helped with these items and of course to all the kind individuals that purchased. On top of the auction we had the raffle which included a star prize kindly donated from World of Computers again of an IPad Pro. Other prizes included a meal at the village inn, John Lewis vouchers etc…

There was much laughter and great to see so many people enjoying the evening that has become a firm favourite in the calendar each year and yet again Nigel is beginning to prepare for 2019 !!!

The biggest winner on the evening is the charities and over the past 3 years this has meant that Nigel and the team at the football club have raised over £25,000.

For more information on our services please contact us

AE Thomson Ltd was established in 1982 to provide expert independent financial advice to clients in East Anglia from our office close to the city of Ely. Over this time the business has grown to have individual and corporate clients in many areas of the UK  whilst still maintaining a top-quality, personalised and friendly service.